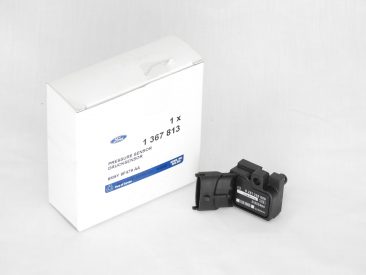 This is an original (O.E.M) Ford part made by Bosch for the Focus ST225.

The map (Manifold Absolute Pressure) sensor is a very important sensor on the ST225, this component is responsible for monitoring and reporting back to the ecu variances in pressure / boost. This part is located just after the intercooler and is mounted in the charge pipe just before the inlet.

The most common reason to replace the MAP sensor would be if you have a boost problem, mainly lack of boost at all times and in some extreme cases no boost at all. The map sensor can become contaminated by oil vapour blown back from the inlet so we advise changing this component at long service intervals, especially those running heavily modified cars.

These 3 sensors all communicate with each other, the MAF first records and reports the characteristics of the air passing through it, the boost solenoid commands a set boost and the MAP sensor then calculates what boost pressure should be received after the turbo in the charge system. We do recommend on vehicles which are 3 years old or older that have never changed these sensors to do so to resore your vehicles lost performance, smoothness and responsivness it would by now have lost.

We do offer a sensor pack which includes all 3 sensors.