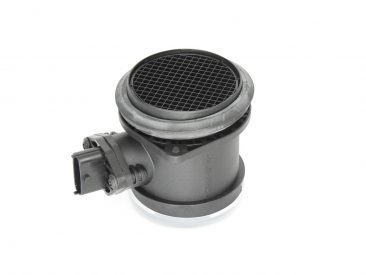 This is an original (O.E.M) Ford part made by Bosch for the Focus ST225.

This product seems to be a very common item to change out on the ST225 as it seems to get contaminated quite quickly by dirt or performance filters which are over oiled and hence coat the MAF.

The job of the Mass Air Flow sensor is to detect the volume, temperature and density of the air passing through it. This information is then relayed to the ecu so the fuel trims can be commanded to make the correct mixture for the exact volume of air being received. When the MAF is faulty, dirty or faulty it will not usually see the correct air volume and the car will either over or under fuel and can cause a lumpy idle and in certain cases an esp fault can appear on the dashboard.

We would definitely recommend changing this part as part of your long service schedule to regain lost performance, improve fuelling, smoothen your idle and overall responsiveness of your engine.

These 3 sensors all communicate with each other, the MAF first records and reports the characteristics of the air passing through it, the boost solenoid commands a set boost and the MAP sensor then calculates what boost pressure should be received after the turbo in the charge system. We do recommend on vehicles which are 3 years old or older that have never changed these sensors to do so to restore your vehicles lost performance, smoothness and responsiveness it would by now have lost.

We do offer a sensor pack which includes all 3 sensors.